CAIR-Texas Central-North (CAIR-TX CN): represents the united offices in Austin and Dallas Fort-Worth comprised of a statewide board and local staff.

Vision: is to be a leading advocate for justice and mutual understanding.

CAIR-TX CN is a non-profit 501(c)3 charity that is in good standing with the IRS. We are both Sadaqah and Zakat eligible. All donations made to CAIR-Texas CN are tax-deductible.

1. Civil Rights: Our office proudly takes on cases of discrimination against American-Muslims or those who are perceived to be Muslim free of charge. We believe that everyone should be treated equally regardless of their race, religion, or background. The best way to defend the rights of American-Muslims is in the courtroom.

2. Government Relations: We believe in giving American-Muslims a voice in the halls of power. Our Government Relations department empowers American-Muslims to vote and engage in the Democratic process. The highlight of this department is our Ambassador Program. The Ambassador Program is a training program where we train community members on how to speak to their elected officials and voice our community's concern.  CAIR-TX CN is a leader in promoting civic engagement within the Muslim community. Our #TXMuslimsVote campaign and website are a hub for information and empowering the community during elections. We also hold several largescale Capitol Days in D.C. and Austin in order to build bridges between elected officials and our community.

3. Media Engagement: CAIR-Texas DFW is the single most successful Muslim organization in the region that regularly provides professional insight and stories to the media. Our trained staff work to ensure Muslim voices are present when there are stories covering our community. We are also committed to empowering Muslim community leaders and advocates to have the tools they need in order to share their stories and have their voices heard by the media. Every year we hold a 1-day "media training workshop' to give community leaders the tools they need to engage with the media.

4. Outreach & Education: By far the largest department with CAIR-Texas DFW is our outreach and education department. Every year our office gives well over 100 talks to schools, universities, religious institutions, and other public forums. We operate a Muslim Speakers Bureau that has professional Muslim speakers who are available to speak at your community's events. We also provide cultural competency training as well as by standard training for businesses.

5. Youth Empowerment: We are committed to empowering the next generation of American-Muslims to be tomorrow's leaders. We believe in teaching young Muslims the skills they need to build a better world and directly challenge injustice. Our Young Muslim Leadership Council (YMLC) is the youth arm of CAIR-TX CN. We hold year-long leadership club for High Schoolers that introduces future leaders to public speaking, debate, how to influence government, and Islamic identity and history. Bullying is a serious issue impacting Muslim students in Texas public schools as well as troubling curriculum that teaches misinformation about Islam, spreads Islamophobic tropes about the Muslim community, is anti-Palestinian, and pro-Hindutiva. That is why we publish the first of it's kind "Bullying Report" of Texas Muslim students in public schools. We also launched a state-wide coalition to address bias in TX public schools. 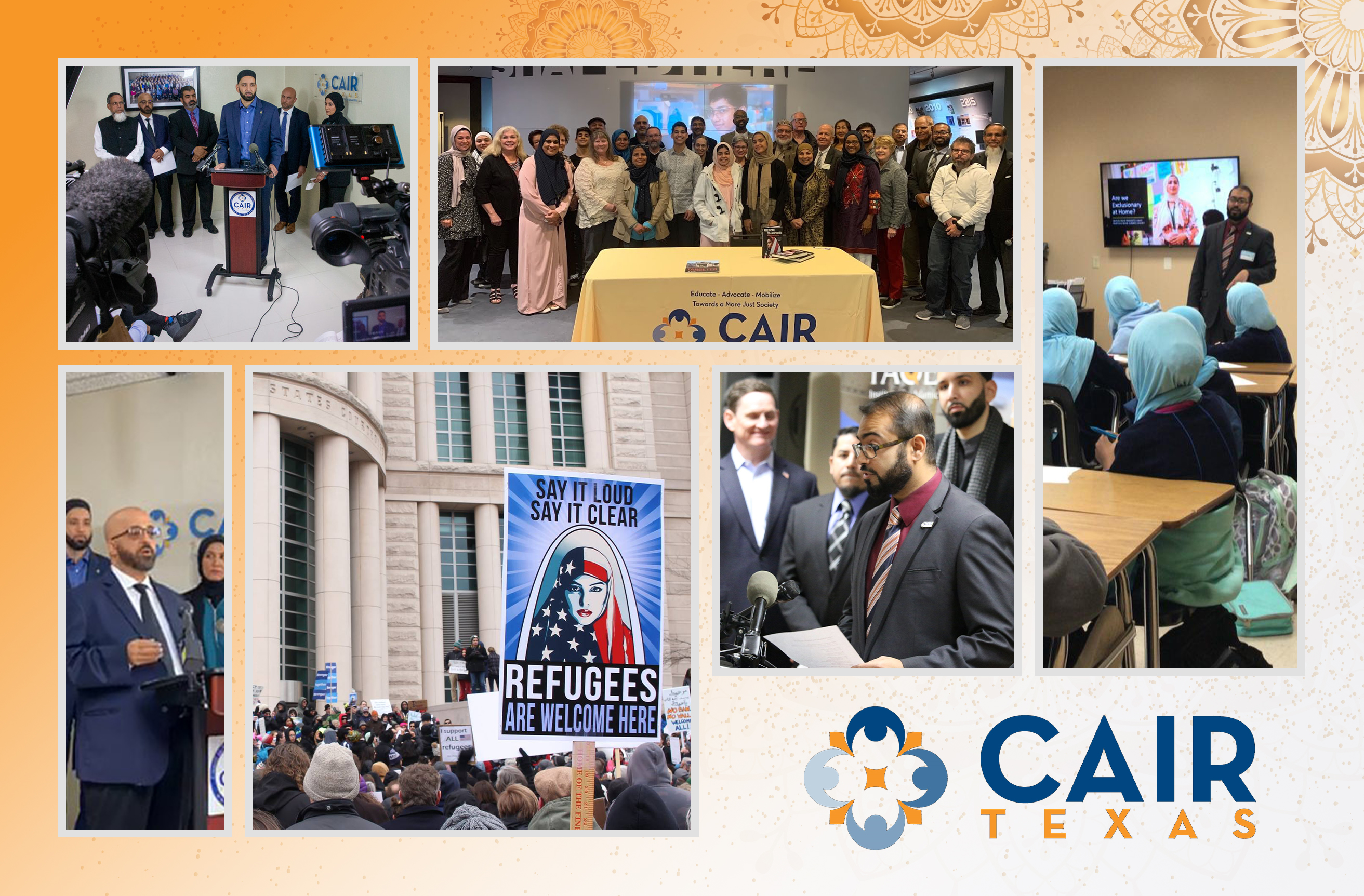 The Five Pillars of CAIR-TX CN